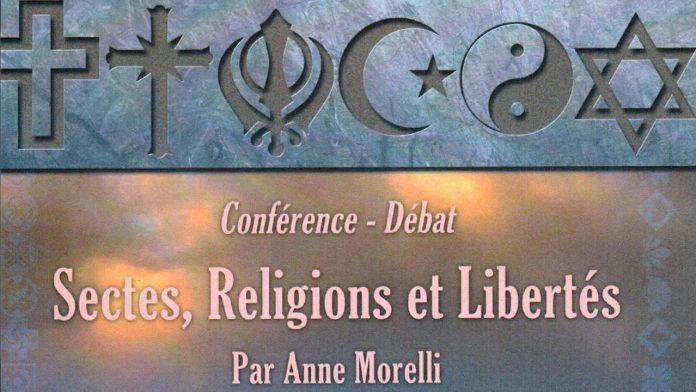 Anne MORELLI is internationally renowned and specialized in the history of religions and minorities. She will make a presentation, the result of several years of research in collaboration with her students. Before starting her work on this subject, according to her own words, and like almost everyone else, she had preconceived ideas on the matter. As her findings progressed, her opinion changed…

Through her sociological work, Anne MORELLI dismantles one by one every argument that seeks to make a distinction between “good” religions and “bad” cults and she also destroys the usual clichés. She suggests that we understand the emergence of the new minority philosophies and spiritualties, integrate them into our societies rather than judge and discriminate against them.

In the mid-1990s, when the media were reporting on several cases involving minority religious groups, this historian, a university professor in Brussels, launched her students into a grandiose investigation of these groups.

The purpose of this investigation: to define the line between “religion” and “cult”.

Initially, the underlying idea, quite conventional, was that one or more criteria would be discovered to distinguish a “religion” from a “cult”.

N.B.: Anne Morelli told us that she would use the word “cult” in her presentation, but considering it is obviously pejorative, it should always be understood as being written in quotation marks.

1st variable studied: the size of the religious group

In Brussels, Jehovah’s Witnesses have about 20 meeting rooms.

On the other hand, in this same city, Judaism, a “great religion”, has only a small number of synagogues!

But some religions that are 3 or 4 centuries old (for example, the quakers) are still called “cults”!

Do some minority religions misleadyoung people and children?

In fact, children are brought to religion by their parents, whether in a minority religion or the Catholic Church and its “catechism”!

In any religious community, parents find it normal to transmit their values to their children!

Anne MORELLI herself remembers being photographed as a first communicant (Catholic) around the age of 10!

On the contrary, in all religious communities, and especially in the minorities, there are many elderly people: they find more listening and human warmth in a small group than in a majority religion.

All religions claim to be “open to all”.

However, each religious community, depending on the religion and also on the neighbourhood in which it is located, targets a different social class.

For example, according to Anne MORELLI, Jehovah’s Witnesses are often recruited among migrants of Christian origin.

Having left the orders, Soeur Sourire tried a new career from 1967 under the name of Luc Dominique, without finding the success of her beginnings. Pursued by the Belgiantax authorities she ended up committing suicide in 1985.

And, more generally, Anne MORELLI notices that, in all religious communities, members generously give money… but that, sometimes, some leaders are dishonest!

Some imagine that there would be an unbridledsexuality in the minority religious groups.

In fact, according to Anne MORELLI, one group, only one, could justify, at least in part, this rumour: . the Children of God.

But in fact, sexual activity – and its possible “excesses” – is comparable among different religious groups, regardless of their size.

Some minority groups are even rather « puritanical », such as the Jehovah’s Witnesses.

Compared to some minority religions such as the « Krishna Devotees» ?

Anne MORELLI cites the example of her Catholic grandmother saying her rosary, and repeating dozens of times: “Sacred Heart of Jesus, have mercy on us!” vs. “Hare Krishna” ?

7th variable studied: how to get out of religion?

Anne MORELLI had three religious aunts, one of whom entered the Order of the Visitation at the age of 18. It was impossible for her to leave it!

When Saint Paul or Constantin, “instant” conversion to Christianity is recounted, people find this very good.

But if someone nowadays enters a minority religion, his relatives say, “He has been brainwashed!”

In fact, any conversion is the result of a personal journey; regardless of the religion to which one converts.

9th variable studied: how a religion regulates the details of people’s intimate lives?

Religion is involved in marriage and more generally in people’s sexuality, both in a majority and a minority religion.

Virginity of Mary, even after childbirth (Catholicism).

Regarding the initial university research, the results found were unexpected! Article on the site Ouvertures