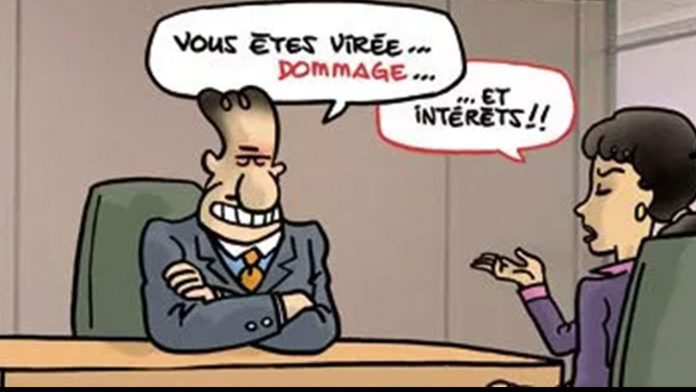 – That the letter of dismissal refers to a press release published in “Le Monde” of 20-21 April 1997 in which Ms. B. presents herself as the “scientific director of Clonaid, a specialized service providing assistance to parents potentially wishing to have a child who is a clone of one of them”, in the context of a commercial activity and stating that she is personally involved in this activity, the letter continues that “the possible confusion between your involvement and Air Liquide is such as to give the impression that the company Air Liquide endorses practices that are unanimously criticized and which go against the company’s brand image”; that the letter further states that these facts were the subject of questions regarding the company’s involvement in human cloning, and concludes that Ms. B.’s duties in the company are incompatible with her responsibilities in Clonaid; that, furthermore, the letter criticises the employee for not attending an appointment on May 29, 1997; that she was therefore dismissed with a discharge from her paid notice period;;

– That this letter can be analysed, on one side, as grievances regarding Ms. B.’s personal involvement in favour of human cloning, and on the other side, as a failure to fulfil her current obligations towards the company Air Liquide, considering both the creation of an amalgam between Air Liquide and Clonaid and the unjustified absence at a working meeting;

– That, in relation to the latter reason for the dismissal relating to faulty performance of the employment contract by Ms. B., the proceedings and the documents produced show that Ms. B.’s employment contract does not contain an exclusivity clause, that the role played by Ms. B. in Clonaid did not deprive Air Liquide of the full participation of that employee in her work who was ultimately regional sales manager at the Irigny plant;

– That the Company does not show how Ms. B.’s functions at the Company are irreconcilable with her participation in Clonaid nor that this could have created an amalgam prejudicial to Air Liquide; that in this respect, in no article does Ms. B. mention her employment at Air Liquide nor does she mention this company; that the fact that, through other members of Air Liquide’s personnel, the Company’s management was questioned about Ms. B.’s involvement in cloning, it has not been established that these persons thought that Ms. B.’s attitude committed the Company; that there is no mention that third parties from the Company questioned the Company about its possible links with such a practice or with the Raelian Church, which supports both Valiant Venture and Clonaid; that consequently, nothing has been established that Ms. B.’s behavior could lead one to believe that Air Liquide was involved, in any capacity whatsoever, in these practices;

– That the debates did not establish the faulty performance of Ms. B.’s contract of employment;

– That the grounds for dismissal based on Ms. B.’s involvement in human cloning, which appears in the article in “Le Monde”, beyond the moral assessment of such a statement and position, fall within the scope of freedom of thought; that Ms. B. can claim that she is accused of developing the ideology of a Raelian church, the form of which seems to be confused with a commercial enterprise taking the form of a cult;

– That French labor law recognizes the right of each person not to be troubled in his or her work because of his or her political opinions or religious beliefs, that in the absence of an allegation of proselytizing within the company, Air Liquide may not use Ms. B.’s convictions to proceed with her dismissal, it being emphasized that it is not alleged that Ms. B. has committed a misdemeanor or a criminal offense on this occasion;

– That Ms. B.’s situation does not justify an allowance under Article 700 of the New Code of Civil Procedure.

Infringe the judgment and rule again:

Orders Air Liquide to pay Ms. B. the sum of xxxx in compensation for dismissal without genuine and serious reason;

Dismisses the parties’ claim on the basis of Art. 700 of the Code of Civil Procedure;