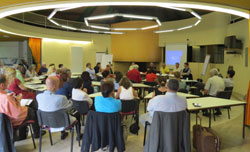 Sunday June 14, 2015, solidarity meeting between the CLIMS (Liaison and Information Centre for Spiritual Movements) the Cap LC (Coordination of Associations & Individuals for Freedom of Conscience), the Omnium des Libertés and the EIFRF (European Interreligious Forum For Religious Freedom)

This public conference held in Geneva revealed facts that were ignored by the press about spiritual groups and minority religions in France.

A large number of people were thus able to discover a very particular conception of secularism according to some French government authorities.

Spicy detail: the conference was held at the John Knox Centre, named after the great Scottish reformer who, with Jean Calvin, contributed to the development of Protestantism. Condemned for a while to the galleys, John Knox did not, however, agree with Calvin on the idea that the faithful should not resist a sovereign, even a tyrannical one.

This reminds us that religious intolerance, a timeless and universal scourge, will only disappear when an authentic interreligious dialogue will finally be established between all religions, regardless of who they may be.

Unfortunately, the general public is not informed

In France, it seems that since the Parisian attacks, last January, religious intolerance has changed direction. Leaving aside for a time the groups described as cults, some Muslim customs are now being targeted. However, representatives of religions are excluded from the debate in the name of secularism!

Another spicy detail: the zealots who, not so long ago, did not hesitate to make raids (in the early morning) in certain spiritual communities, seem this time much less courageous towards the new scapegoats.

A panel of field workers and religious specialists

The originality of the Geneva symposium lies in the diversity of the speakers, although unanimous on the admissibility of the debate. Indeed, the public learns, through the voice of “fighters” who have been present on the French scene for years, a reality that they are unaware of: the danger of sharing their beliefs with their fellow human beings in the very country of human rights.

Amazed, the audience discovered that the list of dangerous sects, published by French parliamentarians in 1995, continued to undermine quarries and reputations, despite its official repeal in 2005.

On the other hand, the Swiss speakers referred to the notion of secularism in their federalist country, in particular the recent revision of the cantonal law on secularism in Geneva, which demonstrated that it was entirely possible to reconcile religious freedom and secularism.

Despite appearances, times change! It is therefore important that spiritual movements, whatever they may be, now occupy the field and make their voices heard, otherwise the arsonists will continue to make history. Indeed, if it is true that there is no smoke without fire, we should never forget that there are indeed arson attacks!