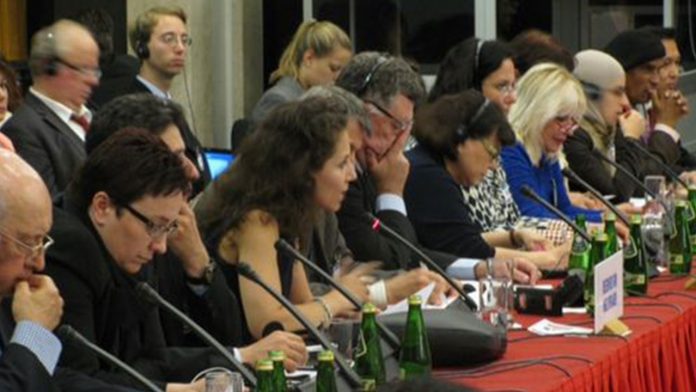 The International Raelian Movement, founded more than 40 years ago, has been present for 10 years at the OSCE (Organisation for Security and Cooperation in Europe) in order to defend the rights of religious minorities.. The Raelian Movement once again highlights the growing discriminatory situation in France, Belgium and Switzerland, largely due to the list of 172 sectarian movements issued by the French Parliament, also known as the list of “dangerous cults”. This list, although having no legal value, is regularly mentioned in courtrooms and is used as a battle horse to attack Raelians, which allows for various human rights violations: refusal to rent conference rooms, refusal to apply for a job if the person joins the Raelian Movement, various insults, etc.

For example, here are three cases of discrimination :

Raelian, she obtains nationality despite pressure from Switzerland

Other case of French discrimination that occurred on April 2, 2013 :
The judge of the High Court of Paris acknowledged that an Internet message, which stated that “Killing a Raelian is not a crime, but a service to the community”, was offensive, but rejected the complaint against the author of this statement as well as the website concerned, on the grounds that the International Raelian Movement had not provided proof of its legal status and that its legal representative had not demonstrated its ability to file a complaint by a vote of the general assembly of its association.

All these standards and procedures are contagious through jurisprudence, not only in France, but also in Belgium, Switzerland and even in Canada. Members of the Raelian Movement can no longer have their rights protected as equal citizens.

The Raelian Movement exists, its members persist in their convictions and continue to improve their spiritual development through a process that lasts throughout life and is at the heart of the existence of every human being. There is therefore no reason to deny this universal fundamental right.

If MIVILUDES, a government institution funded by French taxes, truly aims at protecting its citizens, then this institution should be the first to come and meet religious minorities in their gatherings and inform the public of their aspirations rather than spreading rumours and unfounded fears. The demands of the Raelian Movement are as follow :

1) That the French government stop funding anti-cult movements with taxpayers’ money, unless they protect the rights of all their citizens and support gatherings to promote universal understanding.

2) That the mission of MIVILUDES and CIAOSN (the equivalent of MIVILUDES in Belgium) become that of reviewing all religious books, including those of the great religions, promoting universal peace and removing passages that incite hatred.

3) That the legislative arsenal against minority religions, including the About Picard law, be replaced by a reminder of the Declaration of Human Rights.

4) That governments in Europe change the term “cult” in all future administrative and official documents to less ambiguous terms such as “minority religion”.

5) That civil servants (magistrates, police officers, teachers, educators, etc.) should no longer be trained to fight members of minority religions, as they do in France through CAIMADES, a sub-organization of UNADFI, but rather to promote the protection of universal beliefs and thus ensure more peaceful communities.

6) We ask the OSCE to intervene with the National Education Council to encourage French and Belgian universities to create a totally independent body to study each spiritual movement. This body could be composed of sociologists, psychologists, historians, theologians and other experts in human behaviour, lawyers and representatives of each philosophical group.