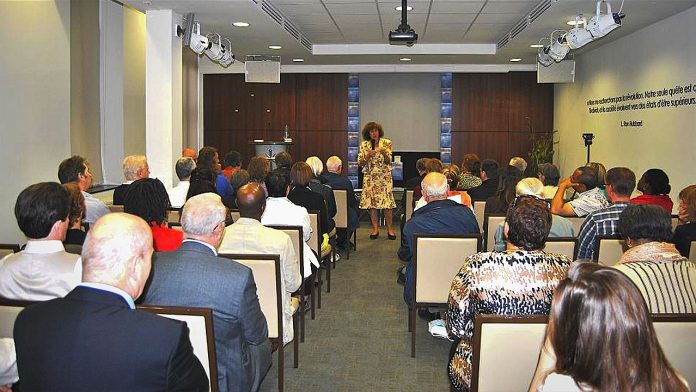 On September 10, 2014 in Brussels, in the magnificent premises of the Scientology, a conference was held by Anne Morelli, a famous historian specialized in the history of religions. She wrote notably the book « Open letter to the cult of the opponents of cults ».

Anne Morelli has been defending for decades the simple idea against all odds that the border supposedly separating religions and cults is impossible to draw.

The term cult being pejorative, it would be preferable to speak of religious minority or young religion but in the following text, since this is the theme of the article, the terms “religion” on one side and “cult” on the other will be used.

For more than an hour, Anne Morelli presented her arguments, starting by reminding us that she was hosting this conference without any financial compensation, feeling therefore, as always, free to make her own comments.
In the early 1990s, Anne Morelli undertook to launch a survey with her students on the theme of the difference between cult and religion.

Various students freely participated in the different activities of these religious movements, regardless of their size. Then a synthesis of all these experiences was carried out, so here are some observations:

When meetings are organized, the leaders of these cults notice a smaller number of people than expected or usual and even seek rational explanations for this temporary decrease.

The public she met is still described by religious leaders as encompassing all social strata, but Anne Morelli does not fully agree with this pattern, even though she notes diversity.

Cults suffer an incredible number of prejudices while the same facts are considered positive when it comes to religions:

Member : When it comes to a religion, the people who compose it are called believers, but for a cult they are followers.

Scandal : A priori in the public opinion only the cults could be the object of scandals nevertheless the study shows that religions generate as much or more scandals.

Link with politics : Being in politics with a religious label is very common, but if a politician is suspected of defending the ideas of a cult, it becomes a scandalous situation.

Conditioning : In a way, for Anne Morelli, education is already a conditioning. In this regard, she shows us her picture as a communicant. If a cult forced its members to proceed as the Catholic Church does in such circumstances, this would constitute an unacceptable personality conditioning practice. It’s the same concept for what is called “brainwashing”.

Conversion : If the fact that a person spontaneously adheres to a religious belief is seen positively, it sometimes results in a change of name, clothing, hairdressing, etc. But if these changes take place in a cult, it is considered extremely negative.
Example: Muslim faith (name change)

Disconnection from the world : Cults are represented as a risk of being disconnected from the outside world, although many participants in these religious minorities are perfectly integrated into society. On the other hand, what about monks like the Carthusian for example? Here again, there is a difference in judgments depending on the case.

Suicide : Martyrs of religions are honoured; in the case of cults it is demonized.

Collective suicide : The case of the Solar Temple is often mentioned, but due to many disturbing elements, the thesis of collective suicide cannot be retained without further investigation.
The historical collective suicide of the Jews of Massada is not considered to be inherent in the philosophy of the Jewish religion, but in the case of cults, it is claimed to be common behaviour even if reality does not prove it.

Number of victims among religions or cults : The perception is still biased to the detriment of cults, but the truth behind the figures weighs heavily on the side of religions.

Logic : Anne Morelli confronts every theory and finds no more logic in believing in the virginity of the Virgin Mary during her delivery than in believing in the reality of an immortal spirit in our body or in the coming to Earth of extraterrestrial civilizations.

Incantation : Some recite untiringly Buddhist mantras or Hare Krishna while others practice constant repetitions as among Orthodox Christians.

Work : There is no refusal to participate in the work of society in the cults except on a religious day or for employment inappropriate to their philosophies. The refusal to work on Saturdays among Adventists is to be compared with the refusal for a Muslim to work in a delicatessen.

Refusal of medical treatment : Jehovah’s Witnesses are known for their reluctance to undergo blood transfusion, but contrary to rumours, no Jehovah’s Witness children ever died as a result of the lack of a transfusion. In the end, if the emergency requires it, the JW parents follow the medical advice.

To conclude the presentation

Anne Morelli notes there is always a double standard between cults and religions, but her study shows that it is similar.
She has great difficulty in finding the precise separation between the two: “The border between cult and religion is an imaginary border.”

Questions from the audience

Anne Morelli was asked numerous questions. Here is a summary of her answers:

How did the students react?
The students who participated in these religious movements came back without difficulty and were happy with what they had seen, much to the astonishment of their colleagues! They did not find any particular concerns even on the sexual level, which were often pointed out by the media.

What was the parliamentarians’ reaction?
I was a member of the parliamentary committee in Belgium that investigated the cults, as well as other university teachers, but I didn’t see how to find criteria to distinguish cults from religions. As a result, the commission’s conclusion was to declare that academics understood nothing about the issue regarding cults!

Is there a danger with teaching?
The example of the Steiner schools is striking. Considered a honourable and subsidized educational system north of Brussels, on the other hand, these schools south of Brussels are considered a dangerous cult by the French-speaking Ministry of National Education!

What phenomenon is behind this fight against the cults?
The cult hunt is mainly European. In the United States, for example, the difficulties are not the same. In the USA, to be an atheist is what seems extraordinary.
Historically, the Catholic religion has frequently “cleaned up” against other emerging religions. But over time, however, it has been forced to adopt a calmer attitude and accept pluralism. But as the cake representing the faithful is getting smaller and smaller, it has had to react against cults as against competitors.

Reflection of a participant :
A conference participant expressed admiration to Anne Morelli for the fact that she is not a member of a religious minority and does not defend her own interests but the love of freedom of belief.

Could the political world be considered a cult?
My study is limited to the spiritual field.

The connection with power?
Religion = cult + power. A religion is a cult with power.

The future of cults, what are your predictions?
The future is difficult to estimate. All is possible. Some minority religions have evolved positively (e. g. Salvation Army, militarist at the beginning and then peaceful) others have had very negative paths (Catholic Church and the inquisition).

Do you have a personal belief?
I initially received a strong Catholic education. My sisters have committed themselves (convent…)
But over time, I lost faith because of the existence of evil and suffering on Earth.
I no longer believe in the soul and I expect nothing from heaven, but I believe in emotions, in the feeling, as for example during a surgery when I was given a pill to feel good and where I was all invigorated and happy.

When it comes to religion, do you see an evolution over time?
In today’s world, there is more openness, more choices than ever before.

Weren’t you afraid of the danger of the cults?
During the research, my students and I worked hard to ensure not to have any preconceptions, to remain impartial. And we have found that there is a relentless focus on small groups.
For example, it has been claimed that Jehovah’s Witnesses were not deported by the Nazis during the Second World War! Similarly, we often ironize about the Raelians’ expectations regarding the arrival of so-called extraterrestrials when it is, after all, a defendable opinion.
The purpose of our study was to treat everyone equally.
A religion is a cult that has succeeded.

What motivates you to pursue what you do? Do you have any hope?
I have no specific hope, just a symbolic satisfaction.

How do you explain the media’s attitude of trying to always divide cults and religions?
The media live on anxiety, pinpoint any event, sensationalize and focus on the emotional. Discriminating sects is a profitable “cow”..

What do you think of self-assessment?
Only the priests could initially read and interpret the Bible. The self-assessment comes from the act of reading the Bible by oneself without passing through the priest’s filter (characteristic of the Protestant movement).
It is the principle of thinking for yourself, of having the ability to criticize.
I believe that in each religious group there is an equal proportion of scoundrels and good guys.
For me, a religion is a framework of value and obligation, whereas being without religion means more freedom.
Problems happen when one religion imposes its vision on others.

What do you think of Dostoyevsky’s quote, “If God does not exist, everything is permissible”?
I do not agree because, for example, prisons are full of believers.
It is not the absence of a god that creates problems but often the absence of common sense in the actions. In the past, it was not allowed not to be a believer. A distinction must be made between orthodoxy (the right belief) and orthopraxis (the right practice). Most religions praise orthodoxy and forget orthopraxis.
Generally people follow their beliefs, which they consider just and they obey their religion without questioning their actions. The problem already arose in the time of the Egyptians: they were buried in sarcophagi in the hope of achieving immortality, but very few asked themselves the question: “Does it work?” And yet no one had come back from the dead to tell them.
Previously, disputes and doubts were not accepted.

When the media talk about religions and cults, what could we say to them?
It is absolutely necessary to contest the use of the word cult, which is devaluing, worrying and to be banned.

How long will this discrimination against cults last?
I think my descendants will still need to fight.

Anne Morelli was warmly applauded and a Scientologist representative concluded: “The thanks we all give you in the room come from the heart.”